At present I have an Air Bike P7 Ever Light (SCC P7 LED, 700 lumens) and it’s been working well for several years now but a while back the cat chewed the charger cable, so I patched it up, but the lamp cable has also been patched up, the lens is cracked and the reflector surface has bubbled in places too. Sure, it still works, but a replacement is overdue.

I can’t afford a decent branded battery pack light (oooww Betty) or a SON dynamo plus a decent lamp. Given the price of the MagicShine lights I’m tempted to buy one, but I’ve also been thinking about a dynamo. Dynamos seem expensive, mostly lack a flashing mode for daytime use and quick release would have to be a DIY solution too. Why am I still interested in a dynamo? Well, the modern battery front lights have such poor runtime that I find it annoying to have to keep charging it, my rear lights last the week so they can happily be battery powered without getting annoying. Fortunately Busch & Müller’s IQ DRL lamps aren’t that expensive and have a Daylight Running (flashing) Light, so if I can keep the price of the hub and wheel down then the only issue is a DIY quick release bracket, I can deal with that. Another thing about a dynamo (in theory) is that I can upgrade or replace the lower costing lamp in future, so when the IQ2 is widely available I can upgrade (or just wish I’d have waited for it). Nexus and Bluebell have different wheel sizes, so I can’t swap it between the bikes, but then I’ll still have the Air Bike that I can use on the lesser used Nexus if I have to.

Finding somewhere that sells dynamo hubs laced into rims isn’t that easy either, some don’t, they only sell the components, some say you’re going to have to contact them with your requirements and they’ll create the custom order for you. A few people recommended Bike24, so I went there, they do sell the built wheel, but unfortunately the cheaper dynamos were out of stock, after some huffing and puffing I decided to just splash out a bit (no, not on a SON, I can’t splash out that much!), here’s what I ordered:
Supernova Infinity S dynamo hub laced into a Mavic XM 719 rim (center lock or rim brake) – €229.90
Busch + Müller Lumotec IQ Fly RT Senso Plus LED Front Light with DRL 174QRTSNDI – €49.90
Total = €279.80

The downside (there always is one) is Bike24 are based in Germany (hence the Euro price tag), so I’ve no idea how much it’s really costing, but I figure if I can afford it in pounds then it’ll be fine.

To be honest I disagree with Wiggins too, the standard of driving is poor, drivers are impatient and drive to quickly, whether I wear a helmet or not will not protect me against that.

Road safety focus needs to be on improving driving standards, I once discussed this with a friend…
17+ year olds drive properly (stay with me), they reach a level, they pass a test, great, so they can driver properly but choose not to 🙂
Everyone else who passed their years ago who really wouldn’t pass a test should not be on the road.
Aggressive or thrill seeking, testosterone fueled drivers shouldn’t be on the road either.
Changing any driving test or requirements for new drivers completely misses the existing road dangers from “experienced”, “good” drivers!

Ride confidently and allow enough room to avoid collisions whenever possible, give large vehicles space and don’t go alongside them.

You may have heard or read about a taxi firm against cyclists BBC: Addison Lee cab firm boss in cyclist comments row
But now it seems he’s been properly informed and has backtracked on a lot of his comments, hopefully support for cycling and cyclists will continue and we will hear less about this sort of thing in future, but the worrying thing is the man in the street actually thinks that way too, if only I had a penny for everyone who thinks ill of cyclists!

The latest is BBC: Should minicabs use bus lanes?

He says something like “Cyclists should undergo a cycling proficiency test”, but I’m not going to check it properly.
Anyway, yes agreed, so should pedestrians undergo a proficiency test. Drivers should be retested annually too. Great, I’m in, there’d be 99.9% of cyclists still on the road, 50% of pedestrians and 1% of drivers!

See you on a bike then pal!

I stumbled onto a helpful Q & A from the CTC: 10 Common Questions about Cycling

Whenever somebody mentions safety I normally say “And people don’t die in car collisions or crossing the street?”. It always seems easier to make them feel less safe about their current travel arrangements than to defend the safety of cycling. I also sometimes ask them where they get the idea that cycling is unsafe from, are they quoting confirmed statistics or just because they can’t ride a bike safely? Generally I think this comes from their fear and I agree, I’ve never been on a horse, so in my head I’m going to snap my neck the first time I try and ride one, but it doesn’t mean horse riding is dangerous, err, is it?

The key to discussing cycling is to first know if the person is an idiot, don’t argue with them if they are, you know the saying 🙂

Another approach is that you can always agree with them… “yes, bloody tree hugging cyclists, I know, but this driver this morning, I was stuck behind him for miles as he was doing 29MPH in a 30MPH limit during rush hour, can you believe it, some people shouldn’t be on the road should they?”

Visit thetimes.co.uk/cyclesafe to enter road trouble spots. I quickly thought of two I’d like to see improved for my daily commute, any others are of less importance, but I’m sure I could come up with 20 or more if I really tried.

See also Join The Times and their cycle safety campaign

Cycle helmets, worth the bother or not? #cycling #safety

The @CTC_Cyclists tweeted “Dutch cycling union say helmets give ‘false sense of security’ and helmet law would be bad for health” see the article here.

I’ve had similar thoughts myself, other thoughts are mentioned in my post Helmet sir?.
Also please consider voting in the poll for fun, comment if you have anything you want to say.

Join The Times and their cycle safety campaign #cyclesafety #cycling

Today I formulated the “hill and bicycle verses car” rule, it’s been on my mind for a few months now, but an impatient driver this morning finally spurred me on.

I’ve notice on my commute there are a couple of small hills where my speed drops right down, there are no cycle paths (or footpaths for that matter) so I am stuck in the road, slogging it out up the hill. I’m happy with this, if the road is clear the other way, drivers overtake, fine. If the road is not clear there are two camps drivers fall into:

1) The patient driver. I salute you. For them I try my best to cycle up the hill as quickly as I can. They wait patiently for a space to overtake and they give me hope that one day all drivers will be the same.

2) The impatient driver. They honk their horn, shout abuse, rev their engine loudly etc. For goodness sake, if I could go up the hill quicker or cycle on a cycle path I would, anything to get away from bad drivers like them, however there is no option. My responses to them can vary, but tend to include:
a) Moving further out, thus discouraging dangerous overtaking that they are more likely to do (compared with a patient driver)
b) Slowing down further, I’m not going to bust a gut up a hill for them

To summarise, the patient driver wins.

Are you ready for winter?

Yesterday I cleaned the bike, chainset, sprocket and fitted a new chain. Here’s a picture taken at work on my lunch break (because it was dark when I finished and so I’ve dirtied it a little getting it here, but it still looks clean compared with normal):

The observant amongst you will have noticed the winter tyres too. Yes, as it’s also going to get more and more icy this week I’ve also fitted my winter tyres:

As you can see, the front rim is narrow and it is a bit of a pain to fit the tyre: 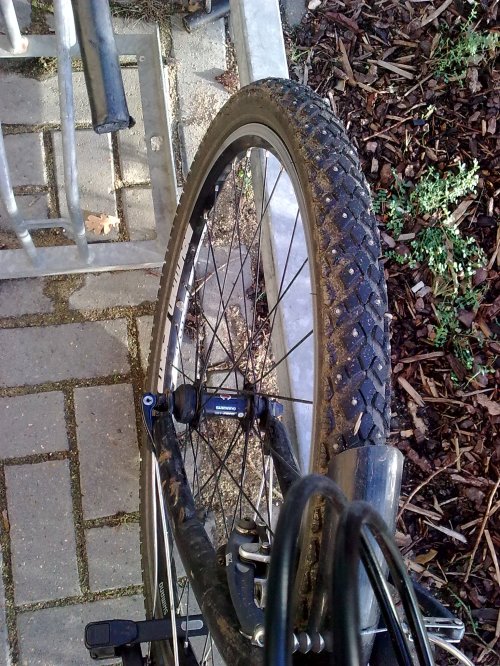 Everyone should ride winter tyres when the frosty season starts, I ride Schwalbe Marathon Winter tyres, I’m not sure if many other brands are widely available elsewhere, but in the UK there’s not much choice. 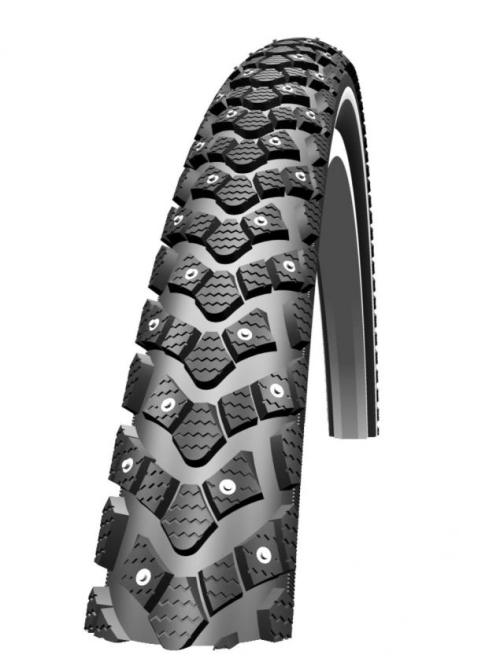 Availability of winter tyres is a bit random at times, they sell out pretty quickly when the slippy weather starts, but for comfort and safety I fit mine fairly early on and ride them until the weather is good again. Some people will get a season out of them, others will get several, I’m hoping to get three, but this will be number two, so let’s see how much harsh braking I do – this morning’s test doesn’t count 🙂

Currently I’m using KMC X8-93 as my chain of choice – for no particular reason other than it is supplied with a missing link and KMC have served me well thus far (definition = only breaking through neglect, I’m trying to avoid neglect now, so no more breakages since): 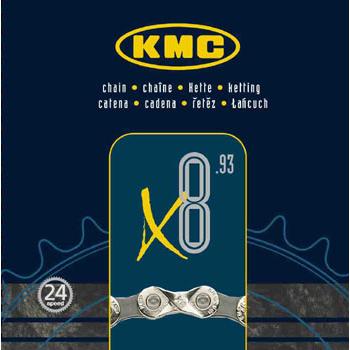 Chains really suffer in winter, the rain, filth and salt really eat through them, so do remember to look after your chain. I regularly check chain wear using a chain wear indicator, but generally ignoring 1% wear, only changing when the indicator won’t fit anymore (probably meaning 2% wear or more). Those with deraileurs need to replace at 1% wear 🙂

Clothing, everybody knows how important it is in winter. Everybody likes different things though, I don’t mind rain, but hate boil in the bag waterproof clothing – which is never waterproof anyway. So for me, waterproofs are an expensive waste of time. I do like windproof fabric though, my Gilet and winter jersey (which both have windproof fronts) are brilliant before the peak of winter. Once winter peak hits, it’s more about covering the legs and arms too. Until the freezing temperatures I still wear shorts and only have my arms covered by a base layer or jersey. Once it is freezing I wear warm unpadded tights with padded shorts underneath, that way I don’t need to change the tights everyday, but can change the shorts, hence I don’t need so many pairs of tights (which are expensive). I also wear a warm base layer and a windproof jacket, I carry my gilet and arm and leg warms in my bag as emergency clothing just incase. If it is -10 celsius like last year then I’ll wear an extra jersey or base layer under the jacket too. When I mention warm here I am specifically referring to Roubaix or Merino fabrics.
More on winter and clothing to follow I’m sure.